Before reaching the heart of the desert in central Iran, there is a village where we own two houses. They have been host to lots of guests from different countries for many years so far.

Known as Barandaz 1 and 2, the lodges are located at Farahzad Village, Khur and Bibanak County, in Isfahan Province and belong to the Tabatabaei family. The houses have been the legacy of the grandfather of the family for decades.

Barandaz 1 was turned into an accommodation for tourists in 2006; it was the house where many family members spent their childhood in. Shortly after, Barandaz 2 was purchased and launched. It is the largest house in Farahzad which was reconstructed before opening.

Farahzad Village was built in the 1940s. Hoping that 12 Imams of Shia Muslims bless the village, at first there were 12 houses built there.

However, currently our family lives in Jandaq City, 45 kilometers from Farahzad. We only come to Farahzad when there are guests and tourists at Barandaz.

But what does Barandaz mean? It was the place in the past where caravan people traveling in the desert unloaded their camels to spend the night. It could be a caravansary, a room, a well or just a place in the middle of the desert without any shelter.

Barandaz buildings are built with clay and thatch and introverted structure of the desert is used in their construction. Barandaz 1 includes 5 and Barandaz 2 has 8 rooms.  The room capacities differ from 5 to 12 people. Both buildings feature a porch, garden, bathroom and Persian and western style toilets. Moreover, there are braziers on which fire can be lit and a special tea made.

At the entrance of the lodge, a special place is set up where certain local rituals are held and ethnic foods are served while guests gather around a big fire.

A family hosts you in Barandaz Lodge. 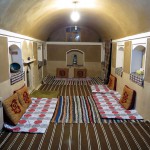